One more tragedy of domestic violence (DV) occurred on October 23, 2016, in Richardson, Texas.  The victim, Hanan Seid was a young mother of two children, a 3 year old and an 18 month old.  She was gunned down by her estranged husband, after having moved out for her and her children’s safety.

I would like to express my utmost appreciation to our Imams who made sure to dedicate their Friday Khutbahs (sermons) to domestic violence during Domestic Violence Awareness month in October. Imam Nadim Bashir of EPIC, Imam Zia-ul Haque of Irving, Imam Yaser Birjas and Omar Suleiman of Valley Ranch, Imam of Islamic Association of Collin County, including Imam Yaseen Shaikh in Maryland, all raised their voices and condemned domestic abuse, and yet the murders continue.

As part of our awareness campaign, we interviewed Mufti Mohamed Umer Esmail from the Nueces Mosque in Austin, Texas. He highlighted their efforts in educating and supporting the Austin community, regarding the importance of peaceful relationships within a family and among men and women as well as the need to emphasize the equality of men and women as stated in the Holy Quran. Read more.

This year alone TMWF has served … 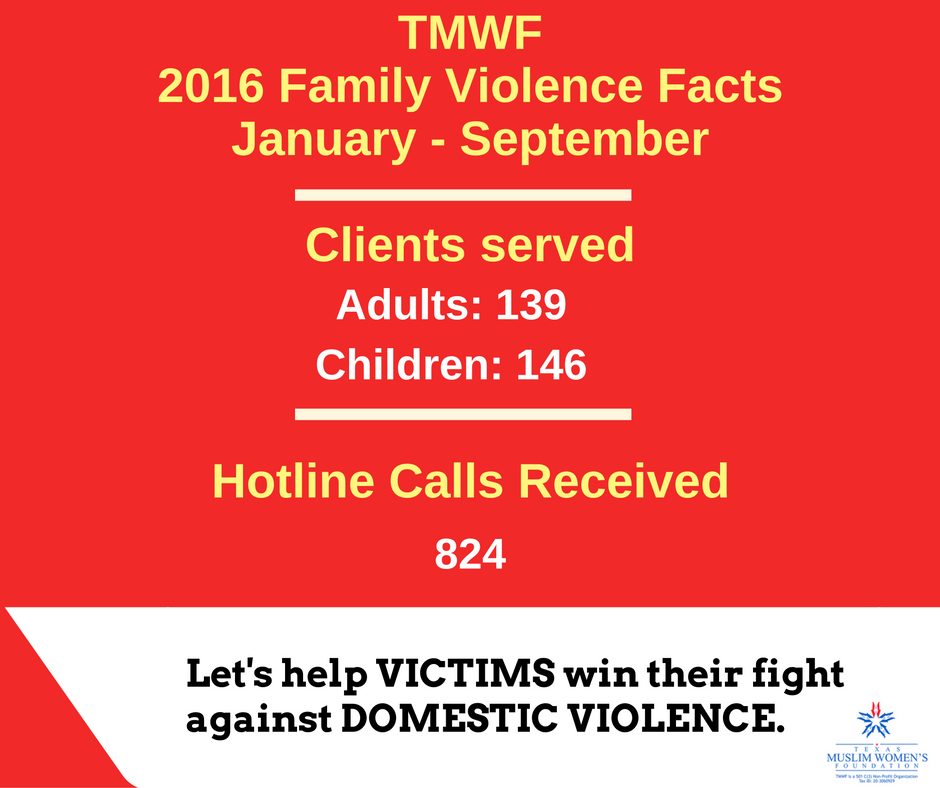 So what should be done?

In the Communities At Large

We at TMWF are doing our best to address this issue, through a very thorough and focused comprehensive approach: both by serving the victims, and also by actively raising awareness.  But we cannot do this alone.  Saving lives and strengthening families requires the efforts of the entire community.  Please join us, learn to recognize the red flags, know the resources available, be generous in your donations of funds, time, and expertise.  Let’s work together to become a community of agents of change and of peace champions. Below are some of the resources available for educators and survivors:

Lastly, I would like to request everyone to exercise their right and sacred duty to elect the next President of this great country.  Please click here to find your polling locations, and encourage all your friends to vote, too.

Thank you for being a #PeaceChampion.